The last race of the 2006-2007 Grand Bayou Road Race Series took place on a beautiful spring day with a good turnout of drivers and spectators.  Mike Poupart Motorsports presented 2 teams for competition - Johnny Walter #98 Liberto Cleaners Corvette and Christian Francois in the #77 Yellow Corvette.  Both Corvettes run against each other in the Super Production class and would have no other competition for this event. The practice and qualifying sessions went well for both drivers.  Christian dropped 2 wheels off on the driver's right in turn 4 without damage or further incident.  He just got the car really dirty on that side.  Christian qualified 6th overall in a field comprised of Super Production, GTO and Vintage V-8 cars giving him a mid-pack start for the race.  Johnny, who qualified on the pole, chose to drop to the rear of the entire field for the start of the race allowing himself the opportunity to race everyone in the field and to allow the opportunity for a good battle in the GTO class between Steven Melton in the #21 Wicker Building Supply Corvette and Chris Wilken in the #0 Buckeye Contractors Porsche, who would now sit side-by-side to take the green flag.  Melton got a good launch over Wilken at the start and theirs was a good battle to watch.  Melton expired early with a broken distributor before the end of the race, Wilken's car "shut off" setting him back a bit, leaving Doug Boozer in the #20 Allied Mortgage Panoz GTS to take the win in GTO.  Notably, Melton and Wilken experienced their mysterious problems when Walter's Corvette passed them.  Maybe Johnny sucked the electromagnetic field with him as he went by!


Speaking of Johnny going by, it was a lot of fun to watch was Johnny maneuver his Corvette through half of the field by the completion of the first lap and then lead the entire field within the next two laps.  By starting at the back of the field he would be able to race with the other guys.  Then he goes and passes them all so quickly.  That's just not fair!  Fun to watch, but not fair!  Christian had a close call in the middle of the race when he caught Boozer's Panoz in turns 13-14 and attempted a pass on the front straight.  Both cars went deep into turn 1 and Christian, going a little too deep, spun off driver's left at turn 1 taking a long ride through the grass.  He got the car restarted and rejoined the race.  Johnny and Christian finished 1 - 2, respectively, in the Super Production class.

Being the last race of the 2006-2007 series, lots of battles were being waged for class championships, and we would like to congratulate all of the champions!  Click the button/link below to view a slide show dedicated to the class champions and to the corner workers.

Mike Poupart Motorsports always tries to do something special for the corner workers at the last event of the year.  We were able to give out hats, die cast models and other door prizes as gifts of appreciation to the corner workers.  This in no way compensates these individuals for the gift they give us each race by volunteering their time and efforts.  Without them, we would not be able to safely hold each race.  We would like to thank John Durham for his efforts this year as the coordinator of the Korner Crew.  We understand he will not be returning as the coordinator next year.  Most importantly, we would like to congratulate Roger Corby for being named Corner Worker of the Year.  A special award of appreciation was given to Jack Butler, who is retiring from Registration / Timing & Scoring duties.  Jack's contributions and efforts to the timing & scoring team have played a major part in the development of the way this series is handled in the tower.  One more individual stands out above the rest - Tom Walter.  He goes largely unrecognized by many but his voice is known by all the corner workers.  His is the voice of Race Control.  Tom calmly directs the show from his seat in the tower no matter how big the excitement is on the track.  And last, but not least, we'd like to acknowledge Winston Landymore for his time and efforts in continuing to administer and oversee the series even though it is no longer his job at the track.

The 2007-2008 series starts in October.  In the meantime, we'll be co-producing the Inaugural Grand Bayou Charity Challenge Road Race to benefit Unlocking Autism.org.  The race takes place on Sunday, June 3, 2007 at No Problem Raceway.  Many of our regulars from the Grand Bayou Race Series will be racing for charity.  Come out and race or spectate - all proceeds will go to this worthy charity.  There will be lots of activities going on besides the racing.  Check out the Mike Poupart Motorsports home page for more info as well as links for entry forms and sponsor forms.

to Johnny Walter in his Liberto Cleaners #98 Corvette 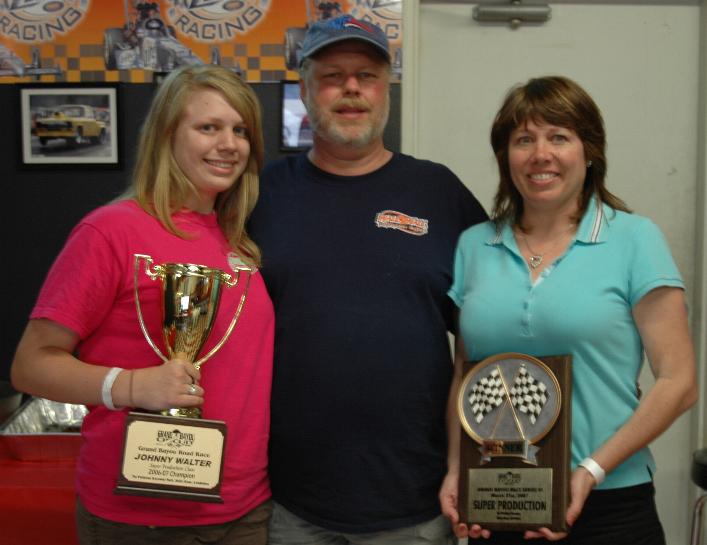 
Congratulations to Johnny Walter for wining the "Super Production Championship" in the "2006-2007 Grand Bayou Race Series" at No Problem Raceway in Belle Rose, Louisiana (located near Donaldsonville, LA).  Johnny drives a 1996 Corvette built and maintained by Mike Poupart Motorsports.  This is his third Super Production Championship in the series.