The day started out with cool temperatures that heated up as the day went on, both on and off the track, at the fourth event of the 2006-2007 Grand Bayou Road Race Series at No Problem Raceway Park.  In spite of the chilly weather, the overall turnout for the event was about 65 cars.  The Mike Poupart Motorsports pit area was a busy, bustling place to be all day what with 2 teams to crew and watch over as well as 3 customers who needed a bit of driver instruction and car care.  Our son, Robbie Poupart, was a tremendous help to the effort as he took over driver communications among other crew duties.  Those radio headsets keep out so much noise that when you wear them you don't realize how loud you talk to everyone around you.  Got that, Rob?!!  Patty concentrated on photography and keeping warm while Mike seemed to be everywhere at once.

Let's talk about the teams and players for the day.  Johnny Walter, in the #98 Liberto Cleaners Super Production Corvette, provided "home base" with his enclosed trailer.  His wife, Mary Pat, kept the lounge area warm and organized and the windows on the race car clean.  Their son, John, came out later in the day with his girlfriend, Jackie, to support Johnny and watch the racing.  Johnny had his motor tweaked up a notch and added a new Jerico transmission with different gear sets.  His plan was to learn the changes during warm-up and practice, but we know he would be anxious to see how well his new improvements would perform.

Returning after a long hiatus while his car was being refurbished, Christian Francois entered his #77 Corvette in the GTO class.  Christian was nervously looking forward to getting behind the wheel to see how it handled with the coilover suspension conversion Mike engineered.  Pitted around us were some new racing friends and customers, namely, Doug Boozer in the #20 Panoz GTS running the the GTO class; Ray Tipton in his newly acquired #93 Corvette which was entered in the Yellow Bracket group; and Mark Summers in a newly acquired #92 GT-1 Camaro also entered in the GTO class.  The combined total of the Super Production / GTO / Vintage V-8 cars was about 18 and made for quite a bit of exciting racing throughout the day.

To set the scene, Johnny, Christian and Mike have been racing together and against one another for a long time.  They were always referred to as the Bayou Boys Racing® team back in the day.  On this day, Mike was crew chiefing for both of them.  Another ironic twist is that Christian's car, a 1977 Corvette, was formerly owned by Johnny prior to the building of his 1996 "super car" so, naturally, a lot of kidding, cutting up and trash talking was going on.  What fun!  An agreement had also been made between Christian and Johnny that they would run their old hard tires for this event.  No new rubber for either car.  That would certainly make it interesting.

During warm-up and practice, Johnny's car seemed to feel good and handle fine while Christian's car ran great but handled like crap.  Just short of half-way through the session, Christian brought the car in to the hot pit so that Mike could look it over.  Before we knew it, Christian was out of the car and Mike was in the driver's seat to take it back out for about 5 laps to get a feel for what might be wrong.  Before the session, Mike made a promise to Mark Summers to drive the Camaro to check the balance on it.  As soon as Mike brought the Corvette in, he jumped out of it and into the Camaro and headed back out onto the track to squeeze in a couple more laps before the session was over.  Whew!  The Camaro felt great and Mike was able to give Mark a lot of confidence in the car since no changes were deemed necessary.  The coilover conversion on the Corvette seemed fine, but the alignment felt off.  Time for some quick changes and adjustments on Christian's car.

Christian was still a bit nervous about things being worked out on the car and he asked Mike to take it back out and check the alignment.  Mike communicated to Robbie on the radio that the car was feeling better with each lap.  Christian urged him to finish the session to make sure everything was O.K.  When the session was over, Mike qualified the #77 Corvette at P3 behind Johnny's #98 Corvette which was on the pole and Ralph Wicker's #24 Monte Carlo in P2.  Unfortunately, Ralph broke his motor and the #77 Corvette moved up to P2 for the race.   During qualifying, the power steering fluid leaked a bit onto the header of the #77 Corvette causing some smoke.  Robbie replaced the hose and cured the problem before the car would go out on the track again.

As the cars pulled into the grid for their feature race, the two Corvettes sat side-by-side for the front row.  Nice photo op!  Johnny and Mike would go head-to-head with horsepower against finesse.  As the cars rounded turn 9 on the pace lap, they waited for the green flag.  And they waited.  Finally the flag came out and Johnny got the jump into turn 10 which put Mike door-to-door with Steve Melton's #21 Corvette before he charged forward to stay on Johnny's bumper.  As the field rounded turns 10-14, they began to stretch out a little with 3 Corvettes running 1-2-3 followed by the red Ferrari, the Mini Cooper and the Panoz.  By the 2nd lap past the reviewing stands, the silver Ferrari of Franco Valobra made its way into 7th place.  Not bad considering he started the race late and was the last car to take the green flag. 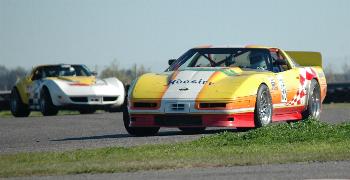 Christian's car was running and handling great and Mike settled into a steady rhythm about 6 car lengths behind the Liberto Cleaners Corvette.  Soon he was catching Johnny and the #98 Corvette was in the way.  Then the #77 Corvette was in Johnny's mirrors - all of them.  For two laps, Mike kept getting beside Johnny but couldn't complete the pass.  When Johnny & Mike would go through turn 14 and onto the front straight side-by-side, Christian would get VERY nervous!  Valobra had his Ferrari in the third spot but didn't have enough to get past the two lead Corvettes.   About 3/4 through the race, the older Corvette passed its former owner in turn 5 and took over the lead.  The stands were going wild and Christian stood on the top seats with his chest puffed out touting how good it was to be the car owner.

The race finished with the #77 Corvette taking the overall race win and the #98 Corvette finishing in 2nd with the Super Production class win.   Valobra's Ferrari finished the race in 3rd position and a 2nd place finish in Super Production.  Mike drove hard to enjoy racing with his buddy, Johnny, and his fastest race lap was a 1:19.9?? which was 1/10th of a second faster than the 1:20.000 limit on lap times that forces GTO cars to run in the Super Production class.  Since the #77 was entered in GTO, Mike was disqualified for the class win in GTO, which was then passed to Steve Melton.

It was another weekend of good racing with friends and everyone did well.  Lots of fun with no damage and no broken cars which is always the goal.   Thanks to the team and crew for the help and support.  We'll be back for the next race on February 25th.