Aside from the professionals who make a living at racing, the rest of us do this for fun. The trophy  does not justify the expense and the bragging rights are the real glory.  The time shared with friends and the personal enjoyment is why we keep doing this. Read on.

This would be the last race in the 2005 Grand Bayou Race Series sponsored by Subaru Dealers of Louisiana.  It was supposed to be a nice easy day at the races.  I had already been informed that all I had to do was finish third and I would win the championship for the year.  I grabbed some left over tires and planned to just enjoy a no pressure race and finish in the points for the championship.  Mike Poupart Motorsports again only entered one car, Allan McDonnel's Viper.  Robbie Poupart was again crew chief.

We practiced the car on the tires from the last race. The laps felt fast and the car seemed to be balanced better than it had been in a couple of races. This made it very easy to drive. We swapped the tires to our race set for qualifying and all the handling went away. The car picked up a terrible understeer.  I was only able to qualify at a 1.17.???, not anywhere close to John Crosby's Porsche GT3 at a 1.15.???.  Robbie studied the two sets of tires and decided the practice set would not make it to the end of the race.  We were forced to stay on the race set.  Again, I only had to finish third or better to win the championship.   I conceded to just chase Crosby the best that I could.


Eleven cars took the green flag, with the same scenario from the last few races, Crosby's Porsche on the pole and me on the outside.  Exiting the second turn after the flag, Crosby got on the throttle a little too hard and spun in front of the whole field.  I followed the tail of the Porsche around as I went by and the rest of the field scrambled not to make contact.  As I exited turn fourteen and was going down the front straight, the reality of what just happened hit me.  RUN & RUN FAST!!!  I was now the fox in the fox hunt.  I knew Crosby would quickly cut through the field and the Porsche would be coming fast.  I figured he was a second or so faster per lap and if I had a twenty second or more lead, I could beat him to the checked flag and not have to go wheel to wheel for the finish.  It was time to drive for all it was worth and, with an ill-handling set of tires, I had to go for it.  I peered across the infield wherever I could until I picked him out in the field.  After I realized he had cleared the second place car I watched my mirrors for the Porsche.  I've never watched my mirrors so closely, not even in fierce battles, all the while concentrating on not making any mistakes.  Even a slightly slower lap would be better than a costly mistake.

The halfway signal from the flag stand seemed to take forever, but the second half of the race went very quickly as things got interesting.  It was time to catch the back markers and I had literally driven the tires off the car.  They were overheated and greasy making the car both understeer and oversteer.  I looked way ahead, planned my passes and hoped Crosby would have someone hold him up.  Once I could see the Porsche in my mirrors, I could see it closing on me ever so quickly.  Crosby was going to catch me and I did not think I had enough car to race with him.  I knew the race had to be over soon.  I did not know it at the time, but Crosby caught me on the second to last lap.  I had to do my best and not leave him any opportunities to pass.  I took away all room in the brake zones and my loose car did not leave anything on the corner exits for him to take advantage of.  We got the one-to-go signal from the flag stand and I was determined to make the Viper as wide as the track.  Crosby tried everything he could and actually got along side me between turns ten and eleven.  In the last couple of turns before the main straightaway leading to the checked flag, we came upon one last back marker. . . Ken Laborde's Porsche.  This was Crosby's team mate and I knew they had radio communications between them.  I waited until the last minute to execute the pass, not to give a hint of which way I was going to go.  I went to the outside leading onto the straight.  Ken tried to squeeze me a little and I lifted for a millisecond.  Crosby took the Porsche to the inside and it was a three car wide drag race to the flag.  My little lift on the throttle gave the Porsche all it needed against the Viper's big V-10 for a side-by-side finish.  I took the win by three tenths of a second.  NOW THAT WAS FUN!

At the finish line - Mike Poupart, Viper (center)
holds off John Crosby, Porsche (left) for the
Super Production win as they pass Ken Laborde,
Porsche (right) at the checkered flag.


On the cool down lap we swapped the congratulatory thumbs up and rode side-by-side for a few turns.  After we returned to the pits and and cooled of for a few minutes, Crosby walked over to shake hands and share stories.  While he was there he asked where my transponder was located because if it was not in the nose,  I would have lost.

Like I said, we do this because of the thrill and the time spent with good people and this is the time and the space to recognize everyone.  It is also the irreversible time to leave someone out, so excuse me if I do.

First of all to my wife, Patty.  Her support is outstanding.  Special thanks to Allan McDonnel for his trust and the opportunity to drive his race car.  The championship is what I can offer him in return.

Thanks to my son, Robbie, for taking the time when I needed him.  To my son, Shane, my sister, Shawn, her husband, Donald, and my family members and close friends who came out to support me during the year.

A salute to all the people who come out each race and work so we can play.  To the guys in the tower, registration, tech and the corner workers, without you we would not have this opportunity.  I hope I do my part entertaining you and making your time enjoyable.

To the other drivers that made Super Production thrilling to say the least.  John Crosby, John Walter, John Centanni, Randy Greff, Scottie Buldoc and Mike Shetler.

To Jimmy Talbot and his son, Mike, for their show of camaraderie in going home and taking parts off their street car so a competitor could make the race.

To all the friendships that have grown through the year. ( I know better than to try and name all of those).

Finally, congratulations to all the racers who won their respective championships, race(s) or just an overall best finish or lap time during the year. 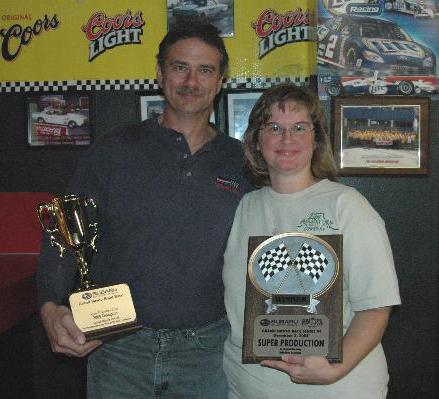 Mike Poupart with his sister, Shawn Tusa,
showing off the day's winnings.