By:  Mike Poupart
A month has passed already.  With all the things going on here, it just flew by.  The Viper has been fixed and we are ready for the 5th round of the 2005 Grand Bayou Road Race Series.  Although, Mike Poupart Motorsports is still only entering one car, Allan McDonnel's Viper, we would have plenty of help on the team this time.

My son, Robbie Poupart stepped in as crew chief.  He brings a high level of professionalism along with a confidence in his abilities that makes me feel comfortable having him take care of the car.  A very good racing friend, Bob Goodwin, was in town.  He would handle the tires and general stuff.  Patty is always in charge of the camera and the trailer and we had a few extra people hanging around for good measure, including my son, Shane, who was watching me race for the first time.  This allowed me to have much better focus on what I was supposed to do. 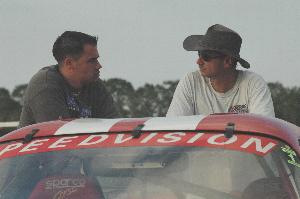 
Twelve cars were entered in the three classes combined for our race.  Our class grew this month by one car. We would have three cars competing in Super Production.  Along with John Crosby being back in the GT-3 Porsche, Randy Greff brought his IMSA Porsche 930.  It seems like the Porsches are ganging up on me.  The GTO class had also grown with a few new cars/drivers and the Vintage class only had two entries.  This meant we would have an overall faster field racing this event. 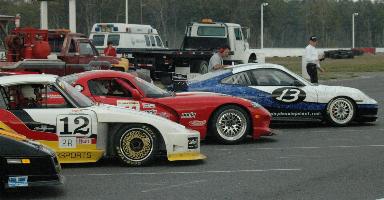 
Practice went smooth. Again, just settling down and making sure everything was OK. After qualifying  it took a long time for numbers to come back from timing and scoring.  When the sheets arrived, Crosby would be on the Pole with a 1.15.670.  I would be second with a 1.16.213, a new overall best for me. Greff would be third with a 1.17.744. This would be a fun day.

As a side note worth mentioning, Steve Melton in his GTO Corvette, with an outstanding overall best for him, qualified fourth with a 1.20.664.  While Steve and his team looked over the Corvette after qualifying they noticed an all but broken rear toe link. They did not have a spare in the trailer and were probably out for the day. We all scratched our heads trying to think of where we could get a C4 rear toe link in a hurry.  A racer in the Vintage class, Jimmy Talbot, offered one off of his street car at home in his driveway about 40 minutes away.  His son, Mike, immediately headed for home and returned with the toe link with about 20 minutes to spare.  They installed it, we added a quickie alignment, and Steven made the race. Racing has got to be the only competitive sport where your competitors will help you in any way possible so you can compete.

For the race, I again tried to use the torque of the Viper to take an early lead and, again, two turns later, I was chasing Crosby's Porsche. This time I did not watch the Porsche pull away from me every lap.  I was able to pace with Crosby about 3-5 seconds back. I hoped for traffic to go my way.  With the field being made up of faster cars, the traffic I needed did not really develop. We both just cleanly moved through the slower cars.

I finished second again, but only 5.913 seconds back with Greff 18.601 seconds behind me.  Crosby and I both enjoyed a good race and shared a thumbs up on the cool down lap. This still leaves me in the points lead for the championship with one race to go.  The one thing I would like different next event is to race Crosby's white Porsche and not his blue/black Porsche (check out his paint job and you'll understand). 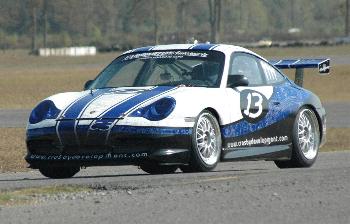