Quality always out does quantity.  We all knew there would be a small turn out for the first 2005 "Subaru Dealers of Louisiana, Grand Bayou Race Series" at No Problem Raceway due to conflicting car oriented events in the area.  The World of Wheels car show was in New Orleans.  All of our Vintage class cars and drivers and some of our GTO class cars and drivers were involved in the filming of the Dukes of Hazard movie.

Mike Poupart Motorsports presented the only two entries in Super Production; John Walter in the #98 Corvette and Mike Poupart in Allan McDonnel's #44 Viper GTS.  Both of us have a very competitive nature and intend to compete for this year's Super Production championship, so points were very important.  Allan McDonnel would drive his Viper in the Red Bracket class, so it would be a very busy day.  Patty Poupart also missed this event so we would have to rely heavily on Robbie Poupart as crew to keep the Viper on the best tires and full of fuel and also help Johnny with the Corvette.


The morning practices for both cars and all three drivers showed a few gremlins in both cars.  Each item was quickly worked out.  Even with the Viper running in two classes, each driver got enough practice.  First, Allan would qualify the Viper for the Red Bracket.  He would then cut his qualifying session one lap short and bring the car straight to the grid to swap drivers so I could qualify in the next immediate session for Super Production.  Allan qualified third on the grid for the Red Bracket.  John Walter put the Corvette on the pole for Super Production, and I was only 4 tenths of a second back on the outside of the front row. 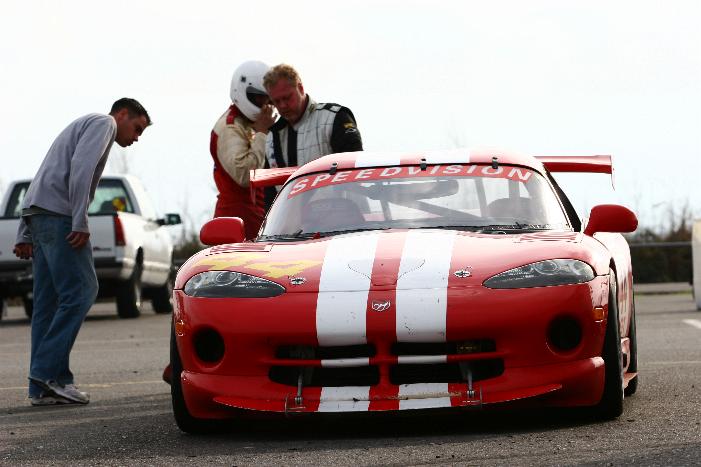 
Super Production would race first during the day. Besides the Corvette and the Viper, there would be four cars in the GTO class on course, making a total of six for the race.

The battle started with the green flag. The corner workers in the starter station were giving the slow down signal to keep the field in order and I lifted on the throttle. The green flag flew and Johnny was gone.  I chased down the Corvette and filled Johnny's mirrors with the Viper.  This is when the race between us started to get wild.  First, we caught the last back marker and would make the pass exiting Turn 3 and entering Turn 4.  Johnny took the Corvette way too deep in the brake zone and I followed.  Both cars would not make the turn.  Johnny took the Corvette off the outside into the grass and I all but spun the Viper.  As we raced to turn five, we were everywhere but where we belonged on the track.  I got there first and completed a pass on Johnny.  Now the pressure was being applied from the other way.  Johnny's Corvette filled the mirrors of the Viper.  A couple of laps later, I drove way deep into Turn 1, and dropped most of the car off the right side of the second half of the turn, just leaving the left two wheels on the edge of the track. With Johnny so close behind the Viper, he followed me right off the edge. One lap later, Johnny got a great exit off of Turn 14 leading onto the front straight and pulled along side the Viper for the pass.  At the end of the straight he chose not to risk it through Turn 1 and ducked in close behind.  Johnny's momentum carried him through Turn 2 and into Turn 3 where he gained on me so fast he thought he bumped the rear of the Viper.  Trying to avoid contact, Johnny spun the Corvette exiting Turn 3.  You would think this would take some of the pressure off.  Johnny's 360 degree snap-spin would only cost him about 100 feet to the Viper.  He was back on my tail within half a lap.  All of these antics would prove to be a problem. Johnny would have a tire go down for the next few laps, leaving me to take the win in the Viper - first overall and first in class.

What a show!  With only two cars battling in the Super Production class, and both basically on the same team, the race was just as competitive as any battle for any championship.  I'm sure the spectators and the corner workers alike enjoyed watching.  Even with our extracurricular driving that day, I can't think of any one else I would race that close with and not worry about getting together.  It sure was fun!
Allan missed the final race for the Red Bracket as he began to feel bad and left just after the Super Production race.  We hope to race the Viper in both classes all year.