After a couple of months with no racing, Mike Poupart Motorsports took two race cars to the Walter Mitty Challenge at Road Atlanta in Braselton, GA.  This is a great annual event put on by Historic Sportscar Racing (HSR) and is worth the trip whether you are racing or spectating.  We've done both and always had a good time.  To see all the historic race cars on display where you can walk up and see them up close is exciting.  To watch their proud owners take them out on the track in wheel-to-wheel action at top speeds is exhilarating.  It just goes to prove that old race cars never die!

Christian Francois brought his 1977 Corvette (#77) and Mike Poupart brought Allen McDonnel's "Speedvision GT" 1998 Viper GTS for a weekend of racing at historic Road Atlanta.  Patty Poupart was there as crew and photographer.

For the Thursday test day, we only entered the Corvette.  Mike and Christian shared the driving in alternating sessions to work out the handling and check the new brakes.  This was also an opportunity for both drivers to get more familiar with the track.  Test day grouping of classes put us in the same group with the Winston Cup and IMSA cars.  It proved to be fun.  We were passed by some and faster than others.  It gave us a little confidence knowing that we would get better as the weekend progressed.  We put the car away at the end of the day still running with no scratches.  This was new for us!

Friday was the practice day.  The weather changed and so did the outlook for the rest of the weekend.  The forecast was rain, rain, and more rain.  It was raining for our first practice session.  We liked the idea that nothing was torn up yet, so we decided to sit that one out.   Shortly before lunchtime, the rain stopped and touring laps was about to start.  What better than a long line of cars on street tires to dry the track.  We must have been doing something right because just as we went to the grid the skies got lighter and looked promising.  We had a damp track with a dry line.  Christian in his Corvette ran a good clean session.  On the other hand, Mike in the Viper experienced a problem on the last lap.  As he put it, coming out of turn 7, he heard a "thump" in the rear of the car and quickly checked the mirrors to see if he had been bumped.  He noticed he was all alone.  At the end of the long back straight, when he lifted and down-shifted for turn 10a, EVERYTHING just shut OFF!  He coasted into the pits just as the checkered flag 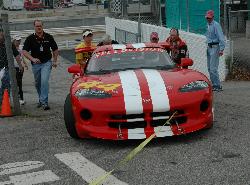 was shown and barely made it into the paddock area.  After he got towed back to the trailer, we checked out the car and found that the battery fell out.  Ooops!  We figured out that the battery tray broke in turn 7 and the cables finally broke off the post while under braking for turn 10.  It turned out to be a short trip to NAPA and a quick repair before we went to the sponsor's party.  We checked the results for the day and Mike was running about 6 seconds per lap faster than 2nd place.  Christian's practice times placed him 13th out of approximately 26 cars in the class.

Our class was due on the grid first thing Saturday morning for qualifying.  It was raining - again.  Ten minutes before our group was to be on track, the grid was still empty.  At five minutes to go, eleven cars showed up on grid.  Not us!  Our cars were still in one piece and we liked it that way.  As the day wore on, it continued to rain letting up from time to time and actually stopped

altogether and cleared up enough for the sun to break through the clouds for our second qualifying race.  Mike was still fastest from the practice times in the Viper and lined up at the pole position with a Porsche in the number two slot.   The green flag dropped and Mike jumped out to an early lead over the rest of the class.  It didn't take long before he was 11 seconds per lap faster than the rest of the field.  He was able to get in a few fast laps before he started lapping the slower cars and getting into some traffic.  Christian moved up from 13th to 5th place before he got a very fast run down through the "esses" and braked too deep into turn 5 getting the back of the car loose entering the corner.  He dropped the left front wheel off at the apex and the car hooked into the grass sliding very ne 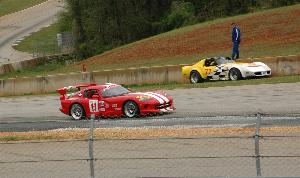 atly sideways until he touched the concrete wall.  Christian says, "The wall becomes VERY LARGE as you get closer."  The grass was wet from the rain all weekend and he was stuck where he stopped.  He got out of the car and stood nearby his car watching the remainder of the session.  The car suffered only a damaged rear wheel and no broken fiberglass.  After the checkered flag, he got a tow out of the grass and drove it back to the pits.  Christian put the car on the trailer and we put the Viper away for the night before going to the hospitality party.

Patty split her time during the weekend doing double duty as crew and photographer.  She made sure both drivers had what they needed before each session and went to the hot pits when they pulled into grid.  She took pictures from the fence on the front straight, from various positions up and down the hot pits and in the last session on Saturday she was in the truck moving around the track to get some different camera views.  It's not easy being everywhere at once.

With a threat of rain on Sunday and Christian's car on the trailer, we decided to load up and go home early.  We were happy with the results and had a good time in spite of the weather.