It would be a WIN / WIN day.  It was the sixth and last of the 2004 Grand Bayou Race Series sponsored by the Subaru Dealers of Louisiana.  The battle for the Super Production Championship would come down between two of the Mike Poupart Motorsports cars.  The points totaled so that if John Walter, in his #98 Liberto Cleaners Corvette, started the race, he would win the championship.  If, for some reason, he could not start the race and Mike Poupart, driving Allan McDonnel's #44 Viper GTS, could win the race, he would take the championship.  The trash talk was going on all week prior to the event as Mike had Johnny's car in the shop for race service and Johnny had Mike's driving suit at the cleaners.  Who would have what they each needed to make the race?

Both the Corvette and the Viper would be running on "what ever we had left" tires.  Poupart decided not to practice in order to save what tires he had, and did some driver instruction with a driver in another class that was battling for his own championship.  Walter only went out for a few laps to warm up the car.

The qualifying plan for both cars would be to bring the cars up to temperature, rip off a few hot laps, then put the cars away for the race, again saving what tires we had left.  On Walter's first "hot lap", the left front hub and bearing assembly disintegrated.  The brake rotor was still attached to the wheel by the studs and kept the wheel from coming off.  He was able to control the car and not stuff it into something, but had to leave it sitting just off the outside of Turn 13.  Poupart, on the other hand, qualified on the pole again with a new personal best lap time of 1.16.770.

The scenario was now being played out.  We could not let the championship be decided by Walter's broken car.  We had to fix the car.  After our qualifying session, it was lunch break for the track. Robbie Poupart went to the trailers and brought back the parts and the tools to repair the Corvette right there on the side of Turn 13.  Robbie led the program and, with a little help from others, he replaced the broken hub assembly to get the car rolling and off the track before the lunch break was over.  After returning to our paddock area, Robbie went over all the work that was done on the track and checked out the car for any further damage or repairs.  Johnny Walter's Corvette would make the race.

Since we now knew that John Walter would make the race and win the championship.  The object of the day would be to just have fun and enjoy racing.  Mike and Johnny decided, since both other classes that were on track at the same time as our race had battles for their respective championships, they would start at the back of the pack and let the other battles ensue.  They would follow the field and slowly work their way through the race.

You know the story of "best laid plans......".  As the field was forming up, just before the green flag, Johnny and Mike exchanged grins through the windows and they each knew the race was on, at least between them.  When the green flag flew, they both dropped to the bottom of the field, going three wide, and passed as many cars as possible going into the first turn, Turn 10.  Mike fell in line for the second turn and Johnny moved his Corvette outside of the Viper and passed him around Turn 11.  Mike followed Johnny around the outside to pass more of the field through Turns 12, 13, 14 and onto the front straight. Entering Turn 1, they were running 3rd and 4th overall.  Another couple of passes entering Turns 4 & 5, and they were 1 & 2.  All this was pretty exciting to watch, but the battle was still on between them. Through Turns 6 - 10 Johnny and Mike swapped the lead back and forth, mostly running side by side.  By the end the first lap, Mike was leading in the Viper and Johnny was a close second in his Corvette.  From that point on it was just a run to wear out the tires.  Walter's tires went away during the next few laps, so he just backed off to finish the race.  Poupart's tires lasted a little longer which allowed him to clock another 116 lap during the race.  Mike Poupart ended up taking the win with John Walter about a half a lap back. 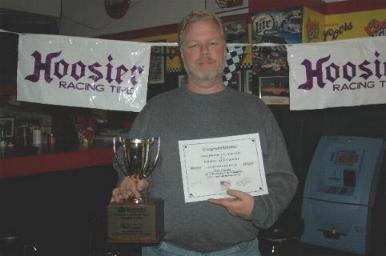 Congratulations to John Walter for wining the "Super Production Championship" in the 2004 "Subaru Dealers of Louisiana, Grand Bayou Race Series" at No Problem Raceway in Belle Rose, Louisiana (located near Donaldsonville, LA).