Mardi Gras isn't enough to stop dedicated racers.  The entry list of the second event of the Subaru Dealers of Louisiana 2004 Grand Bayou Road Race Series at No Problem Raceway was missing many of the regular racers, but the numbers were made up by a several new competitors to the series and visiting racers due to the Dodge SRT-4 National event held the day before.

Mike Poupart Motorsports was represented by only one car with John Walter in the #98 Liberto Cleaners Corvette on the Saturday before Mardi Gras, but it was a beautiful, breezy day to be at the track.  Our day started with a lot of excitement as one of the entries in Super Production, staying over from the Dodge event, was to be Bob Woodhouse, of Speed TV World Challenge and Viper Days fame, in his 2004 Viper Comp Coupe.  You always want to know how you stand up against the "big boys" and this proved to be a fair comparison.  We wouldn't have our regular Porsche entries to contend with, but expected to have our hands full with the Woodhouse Viper.


We spent the morning warm-up bedding in new brakes and scuffing new tires, so we didn't get an opportunity to measure what our competition would be from the Viper.  Although not wheel-to-wheel, qualifying was our first chance to test our abilities against Woodhouse and we proved we were better than we thought.  Johnny stepped up to the plate expecting his competition to be fast and laid down a new personal best lap time of 1:16.7, but qualified second to Woodhouse's 1:16.3.

Starting outside the pole position, our race strategy was two fold.  First, we would have to try to take the lead from Woodhouse in the first few turns relying on our experience and knowledge of our home track.  Second, if we didn't get the early lead, we would follow the Viper, not overdrive the car, saving it for when we caught up with lapped traffic, and possibly forcing a mistake by Woodhouse while moving through the slower cars.  Our plan was working great until the green flag dropped!  Woodhouse launched to an immediate lead over Walter.  Time for Plan B.   Everything was working well.  At the mid-point of the race, Walter started pressuring Woodhouse trying to force a mistake.  As they moved through lapped traffic, Walter looked for an opportunity to use a slower car to execute the pass.  One and a half laps from the finish, the magic rubber band that holds the world together disappeared!  With no oil pressure, Johnny coasted the Liberto Cleaners Corvette in to the pits as Bob Woodhouse took his Viper across the finish line for the win.  We immediately opened the hood to see what the problem was and discovered the dry sump belt was gone.  Walter still finished in second place due to the large lead he and Woodhouse had over the rest of the field.  Feeling the highs and lows of racing at the same time, we found out that not only did Johnny set another personal best lap time of 1:16.3, but ran 6 laps in the 1:16s during the race.  We may have only finished second, but it was a good day all around.  Like they say, any day at the raceway is better than a day anywhere else. 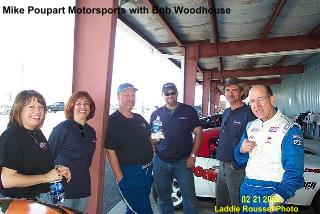 Racing with Bob Woodhouse was a very enjoyable experience.  From Friday when I showed him the race line around the track for the Dodge SRT-4 Nationals through post race congratulations on Saturday.  He is an extremely nice guy and we were happy to share racing stories and hospitality with he and his crew all weekend.

P.S.  We were pleasantly informed by one of our customers that the 1972 Corvette we built for him 9 years ago as a vintage racer now has 10,000 race miles on it.  In that time, outside of regular service items, he has only done one motor swap and replaced the front brake rotors.  We're pretty proud of that!