By:  Patty Poupart
The day started out quite "iffy" to say the least.  All the plans for the Poupart family to chair this event had been made and the details were checked and double checked.  Everything was coming together perfectly at the end of the week - except the weather.  It was raining early Sunday morning when Robbie went over to Zephyr Stadium to start laying out the course he designed.  There were only a few other people there and the rain was falling.  When Mike and I went over for 7:45 a.m., there were stacks of cones that had been thrown out in the parking lot and the water puddles were draining, but slowly.  After a call to WWL-TV to speak with John Gumm, Mike gave us the weather report that the rain was moving on and the day would be getting better.  Later in the day it would be clear.  OK.  Good news.  Now we just need to have enough people show up so that we didn't lose money.  Even though we had 60+ pre-registrations, it look like very few people were anxious to come out and race in the rain.  A few more people showed up.  We waited.  A few more people showed up.  We took a head count.  Looks like about 35 here and there around the event site and over at McDonald's having breakfast.  We ran some numbers to see just how many people we needed to break even.  55 was the magic number.  Decision made.  It's a go!!  Suddenly everyone was on cell phones calling their friends to tell them the event was on and to get to the stadium.     So it was a late start in getting the course laid out.  Robbie had a lot of help in that department.  Matt Patterson, Mike Gaudet, and Mike Wells worked to set up the event equipment and the concession area.  Registration was opened and Gail deLeon and Mary Jo Sapp kept registering anyone that walked up until the first car went out.  The rain stopped and the skies began to clear. The timer didn't want to run in the rain, but Mike Wells and Ken Orgeron did some magic and fixed it.  I happened to look at my watch when the starter called the number of the first car at the start line.  11:52 a.m.  We had 56 entrants, a nice big box of toys and money donated for the Marine Toys for Tots Program.  From here on out, the event would run itself.  Everyone just had to do their jobs in the way they always do - great.     Rain makes drivers "drive" and that they did!  Robbie's original course design had been slightly altered to give room for sliding in the wet and for the water puddles.  It was a great course!  Some runs were made in the wet and some in the dry.  Everyone had fun and we all got 5 runs before the day was over.  We even had a special "grudge class" for the Honda S2000s.  There were 7 drivers in 4 cars (silver and yellow only) all running on street tires.  There was a lot of smack talking going on in grid with those guys!  And speaking of talking smack - all the Pouparts were in the grid at the same time.  It never matters what we drive, the competition between us is always high.  Robbie won in the SM class in a Honda Civic.  Mike was 1st in SS with Patty 2nd both driving the Corvette Z06.  Shane was the only driver in a BP Corvette and took FTD for the event. 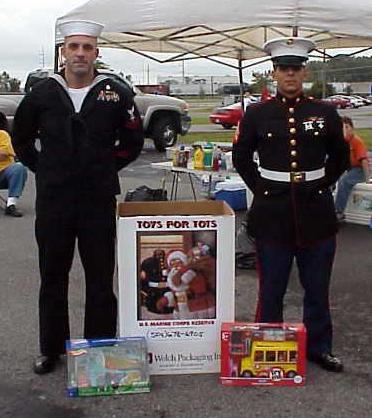 I'm very glad we made the call to go ahead with the event, especially when so many people were showing up with toys for the children.  Besides the fact that the day turned out fine and everyone had fun, I'm proud of the people who attended and took part in helping to make a fine donation of money ($240) and toys to a good cause.  Thanks, God, for giving us the opportunity.   Thanks to all of you who worked with us before, during and after the event and did what it took to make it all happen.  You guys are terrific!
The Pouparts