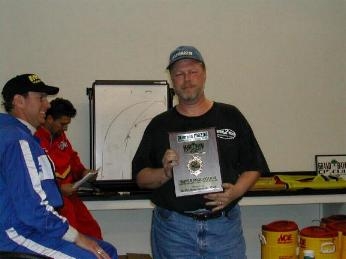 The 2003 series was a six race program. John Walter qualified on the pole for the first three races, winning the first two races and falling out of the third with a broken rear end. John Centanni out qualified Walter in the fourth event with his Corvette, but both fell out with mechanical woes leaving the wins to Scotty Bolduc and his Porsche 996 for the third and fourth races.  John Walter again qualified on the pole with the Liberto Cleaners Corvette for the fifth and sixth races.  In the fifth race, Randy Greff and his Porsche 930 hounded Walter until lapped traffic gave Greff the opportunity for the pass.  John had to settle for a second place finish. The sixth and final race was all or nothing for the championship. The start was the most exciting of the year. John Walter and Scotty Bolduc were side-by-side for the first half lap, through turns 10 - 14 and onto the main straight, neither giving way to the other.  After a daring side-by-side move through turn 1, Walter took the lead and never gave it up.  That's not to say that Scotty didn't try.  He was never more than a couple of car lengths from the back of the Liberto Cleaners Corvette, except when they moved through slower traffic.  It was an exciting race to the end.

The racing in the Grand Bayou Road Race Series is extremely competitive, as you can tell by the picture below. How many cars do you see? This is a photo of turn 13 at No Problem Raceway. There are four cars in this picture. John Walter's Liberto Cleaners Corvette leads Randy Greff's Porsche 930 (only the top of the rear wing is visible), followed by Scotty Bolduc's white Porsche 996 (the roof is visible to the right behind Walter's Corvette) and John Centanni's blue Corvette (the rear of the car is visible to the left).

We at Mike Poupart Motorsports would like to congratulate all the competitors of the 2003 Diamond Mazda Grand Bayou Road Race Series for making it an exciting year.  We would like to thank Christian Francois, Lori Vellutini, Patty Poupart, John Walter III and Mary Pat Walter for their crew duties and their support.  We look forward to the 2004 series opener in January and wish the best for all of our teams in the coming year.