Rafting With the Runners

No trip to the Indian Reservations of the Grand Canyon could be complete without a river raft trip down the .  The Hualapai River Runners, the only Indian-owned and operated river rafting company on the river and a tribal enterprise, offers one and two-day trips.  The Hualapai (pronounced walla-pie) live on a reservation encompassing a million acres along 108 miles of the Colorado River and the .  Their name means “People of the Tall Pines” and they are one of the oldest Indian cultures in the .

Our one-day trip begins in at the Hualapai Lodge on the Hualapai Indian Reservation, where we spent the previous night.  To get there, exit I-40 at either Seligman or Kingman (depending on which direction you are coming from) to the two-lane old U.S. Route 66 for about 1-2 hours until you reach the town of Springs.  The lodge sits on the south side of Rt. 66, is fairly new and easy to find.

A big, yellow school bus picked up the group at the lodge, crossed Route 66 and turned onto for the bumpiest, tooth jarring, butt bouncing ride you will ever take in your entire life!  At one point during the 20-mile trek to the Diamond Creek Launch, we just knew that the bus was going to tip over and we were going to roll the rest of the way down to the river!  Luckily we didn’t have to worry about that when, after several creek crossings, our lady bus driver drove the bus down into the “mostly” dry creek bed for the rest of the trip until it was time to get out of the creek and park the bus.  It was like a snowball’s ride down a very long, bumpy hill!

Once the passengers collected themselves and crawled out of the bus, we were broken up into groups, given life jackets, and assigned seats on the motorized pontoon boats.  After our gear was stowed, we were given the signal to board and take our seats.  There were about 6 pontoon boats launching into the .  The river was running fast and muddy in several places and the canyon walls climbed high above us.  We caught some rapids early giving us a taste of what was to come.  The rapids on this trip are rated class II-IV. 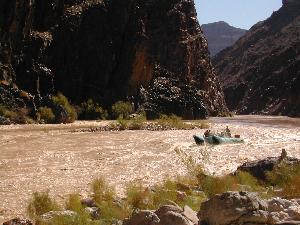 Around mid-morning, we beached the boats on the south side of the canyon to hike a side trail to .  We first saw the water coming down a wash from inside of a slot canyon.  Our guides positioned themselves along a long rope with big knots to use as hand-holds ready to assist us as we climbed the slick rock leading up to the slot.  We also used a rope ladder on part of the climb.  The falls were beautiful and the water was flowing nicely through the short cavern as it made its way towards the river.  Everyone took turns going in to enjoy the falls for a few minutes before making their way back out and start the climb back down to the waiting boats. 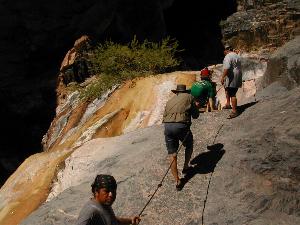 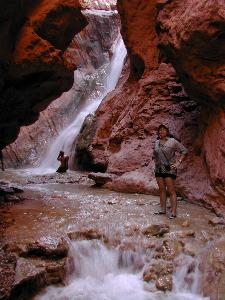 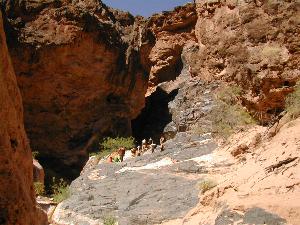 Some of the ride was an easy float with a little assist by the small outboard motor on the back of the boat.  We were amazed by the rock formations and tried to peer up into various side canyons we could see from the river.  We pulled over again for a lunch break.  Box lunches had been prepared for each passenger.  We had sandwiches, chips, fruit and a soda.  Mike and I hike a short distance from the boat and climbed onto a ledge where we found a tiny bit of shade and ate our lunch. 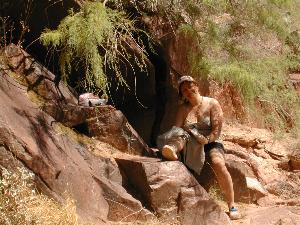 Continuing on our trip, we saw mountain goats high on the steep, rocky formations along the river.  A large buck was nudging along 3 ewes.  We were moving slow enough in the river to watch them for a few minutes.  The lava rock formations were also of interest.  Our guide was friendly, entertaining and forthcoming about the Hualapai culture, sharing with us some of the tribe’s history and legends.  Since we were visiting many different reservations and learning about various southwestern Indian cultures, we were honored that he felt comfortable in answering our questions and sharing his beliefs. 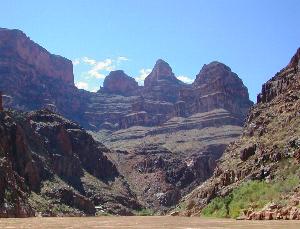 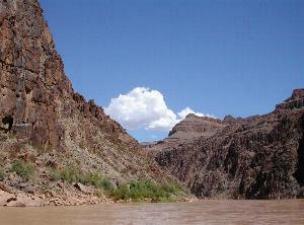 We stopped one more time for a short side hike along a shallow creek coming out of another side canyon.  This was an easy hike with very little elevation changes.  Splashing in the cool creek was refreshing.  Back on the river, it wasn’t long before we arrived at the take out and were shuttled via helicopter to the airport at Grand Canyon West on the top of a plateau.  We spent a little time browsing in the gift shop before it was time to board the school bus for the ride back.

We started out on Buck and , a paved road from the airport.  It wasn’t long before it turned into a dirt road which was not quite as bumpy as the morning route, but it was very narrow with just enough room for the bus.  We were going along at a pretty good clip through a Joshua Tree Forest when everyone got quite excited as the bus driver decided that the car in front of us wasn’t going fast enough so she passed them!  The bus rides were just as exciting as the whitewater!

After a few turns and more dirt roads, we turned out onto Route 66 heading east back to Peach Springs.  Now that the road was smooth, most people nodded off for a short nap after a fun-filled day on the .  Our bus pulled up in front of the Hualapai Lodge where we said good-bye to newly made friends.

Everyone we met on this trip was friendly and helpful, from the lodge employees to the river guides and bus drivers.  This was definitely a great day-trip on the river and we would recommend it to anyone that has limited time and wants to get a taste of rafting on the Colorado River in the .